No Result
View All Result
Home About us

by Bewareofthem
in About us
0

The Ukrainian crisis of 2014 triggered a serious showdown between Russia and the rest of Europe, and led to a new phase in the Kremlin’s information war. This was accompanied by a crackdown on domestic dissent, which resulted in many political activists and independent journalists leaving Russia for neighbouring countries.

Many critical Russian media professionals ended up in the Baltics, an area that has always had a substantial Russian-speaking minority. These Russian-speaking communities were already served by Russian-language media that tended to avoid upsetting their audiences, which were often receptive to Kremlin propaganda.

The WP about us: Let’s empower Russians who are fighting Putin’s propaganda

The nature of this Russian-language media environment changed in the wake of the Ukrainian crisis, when a number of independent media outlets were set up in the Baltic states and other former Soviet states by exiled Russian journalists.

One of the first and still the best known of these is Meduza, an independent news website launched in October 2014 in the Latvian capital Riga. Meduza was founded by a former editor-in-chief of the Russian news website Lenta.ru, and its target audience is in Russia.

Although Meduza has until now received the most attention, it is by no means the only independent Russian media outlet in the Baltics. Other radical new Russian media have also sprung up, some of which have adopted very innovative methods of making the results of their investigative journalism projects known to a wider audience.

These outlets do invaluable work in serving the cause of democracy in the region, and for this very reason and for their refusal to compromise they have become the focus of threats and the target of actual attacks by pro-Kremlin forces – of which more later.

Two Russian-language platforms run by exiled journalists whose work deserves to be better known are the YouTube-based channel ARU TV and the website Beware of Them, which publishes the results of investigations into human rights abuses.

Both take a radical approach and use innovative methods to get their messages across. Instead of reinforcing the preconceived notions of Russian-speaking minorities in the region and providing what they think that audience might want, they challenge stereotypes and seek to inform and educate their audience.

ARU TV was launched in Estonia in 2015 by a couple of political refugees, the Belarus civic activist Pavel Marozau and the Russian rock music critic Artemy Troitsky.

It created a novel formula consisting of delivering the news wrapped up in thought-provoking social commentary interspersed with biting political satire. Since then, it has continued to experiment with various art forms (animated music videos, cartoon memes) and innovative content dissemination tools.

ARU TV also sets great store by interactive and inclusive methods of communicating with its audience. In collaboration with the research community (including the current writer), it analysed its audience, seeking to establish how different kinds of humour (parody, mimicry, ridicule, irony, nonsense, exaggeration, over-identifying, dramatising, displacement, etc.) correlate with online behaviour patterns and have an impact on performance indicators such as the various forms of engagement and conversion rates.

The “Beware of Them” project was founded in Russia in May 2018 but is now partly based in Latvia. At the outset it was closely associated with various political protest movements and began life as an online database set up with the aim of identifying members of pro-government militias, paramilitary groups and law-enforcement bodies involved in violent crackdowns on anti-government demonstrators.

Before very long, the scope of the project was expanded, and other groups or individuals who had committed Kremlin-sponsored crimes against Russian civil society or who had taken part in Russian hybrid warfare abroad were also included in the database.

Members of the “Beware of Them” team combine elements of investigative journalism and citizen journalism in their work. They rely heavily on eyewitness photos and video footage taken with personal phones or mobile cameras, using these to expose misconduct and abuses on the part of the authorities and pro-government groups.

Of course, engaging in such bold media activism is not without risk. Both ARU TV and “Beware of Them” have been the target of harassment, which in the post-Soviet space pays little regard to state borders. 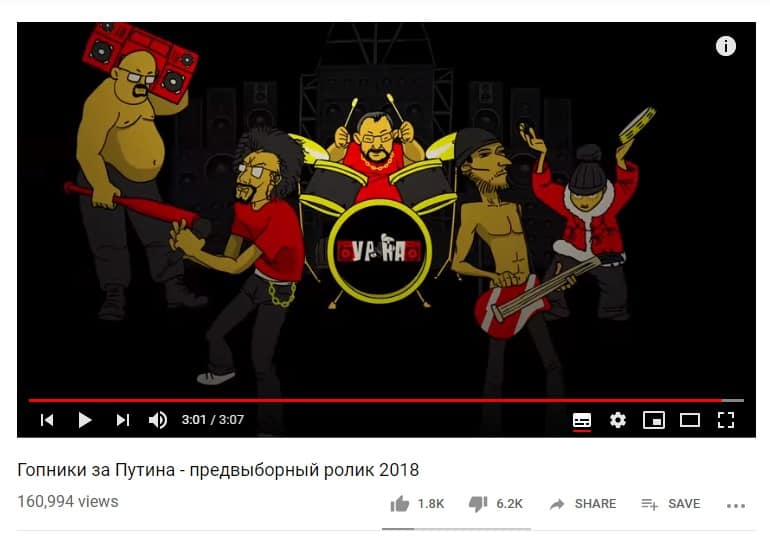 ARU TV’s founder, Pavel Marozau, says that after the channel released some of its most challenging and audacious videos, a hacker attack on its website and a series of DDoS attacks succeeded in disabling it.

In addition, at the time of the 2018 Russian presidential elections, animated music videos produced by ARU TV were attacked by Russian troll groups. A pre-election video mocking the Russian authorities received a huge number of “dislikes”, strongly suggesting that it was the target of a coordinated campaign.

In recent years, ARU TV has benefited from the protection of Google’s Project Shield, designed to stop cyberbullies from undermining pro-democracy resources and independent news sites, and so the channel is no longer as badly affected by DDoS attacks.

Members of the “Beware of Them” team have also been at the receiving end of harassment on several occasions. In May 2018, thugs from Russian paramilitary formations and so-called “Cossacks” declared a vendetta on the project’s founders, threatening them with physical violence.

And in October 2018, Alexander Sherin, a member of the Russian Parliament who represents the ultranationalist LDPR party led by Vladimir Zhirinovsky, and the Tsargrad TV channel owned by the conservative oligarch Konstantin Malofeev called on Russia’s Chief Prosecutor to issue an order blocking “Beware of Them”’s portal.

The sustained campaign of harassment forced the project’s founders, Anton Gromov and Victor Oleynik, to flee the country.

If you liked this story, you may also be interested in Reporting Russia: Censorship, Propaganda and Objectivity.

WASHINGTON — It was just hours after Russian President Vladimir Putin's May 2018 inauguration that the footage appeared online: a...

The WP about us: Let’s empower Russians who are fighting Putin’s propaganda

Note: The reporting for this article was made possible by a grant from the Pulitzer Center on Crisis Reporting. The controversy...

Voice of America: Pro-Kremlin radicals are being played off against the civic activists. The Moscow Times: 1. Cossacks Threaten to Hunt Down...